DETROIT, Michigan- Governor Gretchen Whitmer announces that the State of Michigan is moving forward with plans to replace the outdated I-375 freeway with an urban boulevard to spur economic development and provide easier access between adjacent areas of Detroit. the The Michigan Department of Transportation (MDOT) has concluded its environmental review process after obtaining a finding of no significant impact (FONSI), which allows the project to proceed to the design phase, starting this spring .

“With the conclusion of the environmental clearance phase, we will continue to move forward on the I-375 project,” said Governor Whitmer. “Since I took office, Michigan has repaired more than 13,000 miles of roads and more than 900 bridges while supporting nearly 82,000 jobs. However, as we continue to get things done on the roads, we need to take a closer look at the unjust legacy of so many of our freeways This includes I-375, which paved two thriving black neighborhoods decades ago, displacing 130,000 people, hundreds of small businesses, churches , etc. Now we must build our state’s infrastructure with equity at the heart. We cannot change the past, we must work harder to build a fairer future, and that starts with listening and engaging. with the community, and take deliberate steps to get it done right.”

“As development has pushed east of downtown and west of Lafayette Park, the barrier that I-375 represents in our city has become even more apparent,” said Detroit Mayor Mike Duggan. “Removing the freeway ditch and replacing it with a street-level boulevard will open up tremendous development opportunities. It was black residents and black businesses who were hurt when Black Bottom was wiped out and they were displaced for the construction of this highway. Black businesses today stand to benefit from the enormous development opportunities this project will create. The equity of participants will be just as important as the final appearance of the new boulevard. We can replicate what we did on Livernois when we worked with neighbors to reinvent this historic business neighborhood, which is now the city’s fastest growing and most thriving Black-owned business corridor.”

“Reaching this milestone took a great amount of listening over many years,” said Director MDOT Paul C. Ajegba. “Working on the issues and concerns raised by community members is key to the success of any project. Removing the environmental barrier allows MDOT to continue with other partnership opportunities throughout the development process. design.”

“As a former resident of Lafayette Park, I know there is no way to undo the damage the I-375 building has done to black communities,” said Stephanie Chang, State Senator, District 1. I am truly pleased that MDOT recognizes that racial equity work needs to be done in this area, although we know that Project I-375 will not be able to address all of the inequities that persist in our communities. I hope that with the issuance of the FONSI and the progress of the project, the community engagement process will elevate the needs and desires of the local community so that progress in connectivity and sustainability also includes the prioritization of spaces greens on surplus land as the majority of neighbors want, not commercial or residential development that is out of financial reach for many Detroit residents. »

“As a business owner, I look forward to transforming I-375 into a boulevard that will bring more businesses to the area, grow the local economy and create a sense of community,” said Jim Jenkins, CEO of Jenkins Construction.

I-375 was built over 50 years ago. During construction, the prominent black neighborhoods Black Bottom and Paradise Valley were demolished to make way for the highway. Built across a booming Hastings street, the new I-375 opened in 1964 and created a barrier between Detroit’s central business district and neighborhoods to the east, leading to decades of underinvestment and a lack of opportunity for predominantly black communities on the other side of the highway.

Several blocks of commercial and residential buildings were also leveled to make way for the highway and urban renewal. Although I-375 has a number of cross bridges, many properties have declined due to reduced connectivity and primarily because the economic and residential base of the community has been significantly disrupted.

Today, nearly three generations later, Michigan has the opportunity to break down that barrier and provide easier access to better jobs, services, and quality of life for residents in adjacent areas of persistent poverty. After nearly 60 years of use, I-375, the I-75/I-375 Interchange, and associated bridges are nearing the end of their useful life and need to be modernized.

Extensive research was carried out beginning in 2014 with an Environmental Planning and Liaison (ELP) study to identify and assess alternatives for the corridor that would meet the transport needs of all users in a cost-effective manner and improve connectivity. The PEL determined that turning a freeway into a boulevard was feasible. The conclusion of the PEL led to an Environmental Assessment (EA) study to document the human and natural impacts associated with any proposed improvement. Guided by the purpose and needs of the study, as well as extensive public outreach, a preferred alternative was developed and presented in both a virtual meeting and an in-person public hearing in January 2021 .

MDOT and the Federal Highway Administration (FHWA) have documented and thoroughly reviewed the public comments submitted in the FONSI, which is the final version. National Environmental Policy Act (NEPA) Decision Document and describes why the I-375 Improvement Project will not have significant environmental impacts expected upon implementation of the selected alternative design. NEPA is about people and places and balances engineering and transportation needs with natural social, economic and environmental factors.

In response to public comments, MDOT has added action items that recognize the impacts to residents and business owners in the former Black Bottom and Paradis Valley neighborhoods. These measures include:

The chosen alternative is a street-level boulevard that will begin south of the I-75 interchange and continue to the Detroit River (Atwater Street), effectively using the city’s network to disperse and collect traffic and will open additional connections to the riverfront, Eastern Market, and Brush Park, and create a new local feeder street between Eastern Market and Gratiot Avenue. Improved non-motorized facilities include a two-way bike path on the east side of the boulevard connecting the waterfront to the extension of Montcalm Street and will extend west to Brush Street and east to avenue Gratiot, where it will connect to the Dequindre Cut cycle path.

FONSI is available on MDOT website and at the following locations:

Since Governor Whitmer took office, the State of Michigan has invested nearly $4.75 billion to repair, replace or rehabilitate more than 13,000 miles of roads and more than 900 bridges. The Governor’s $3.5 Billion Rebuild Michigan The plan is to move dirt to fix roads with the right mix and materials, support 45,000 jobs and ensure workers can get to work and parents can drop their kids off at school. completely safe. 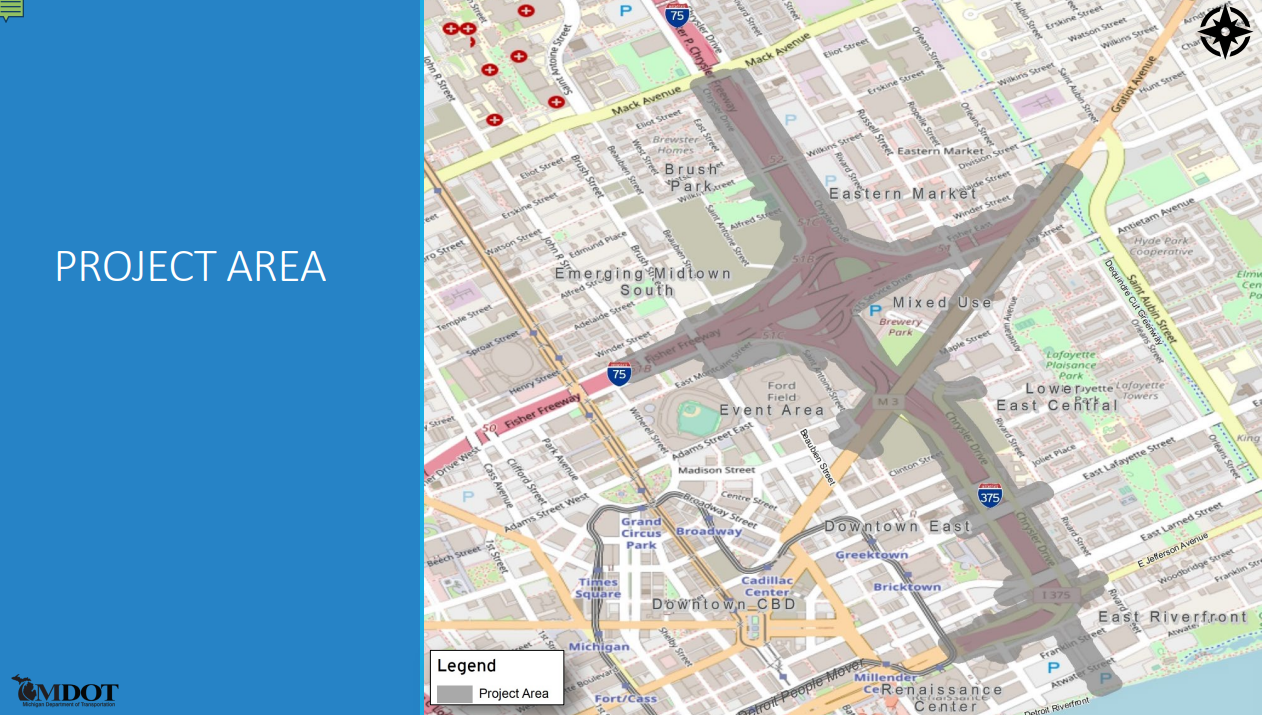